One of the highlights of my trip to lovely San Francisco for VMworld was getting to join Scott Lowe and Brad Hedlund for an off the cuff whiteboard session.  I use the term join loosely because I contributed nothing other than a set of ears.  We discussed a few things, all revolving around virtualization (imagine that at VMworld.)  One of the things we discussed was virtual switching and Scott mentioned a total lack of good documentation on VEPA, VN-tag and the differences between the two.  I’ve also found this to be true, the documentation that is readily available is:

This blog is my attempt to demystify VEPA and VN-tag and place them both alongside their applicable standards, and by that I mean contribute to the extensive garbage info revolving around them both.  Before we get into them both we’ll need to understand some history and the problems they are trying to solve.

First let’s get physical.  Looking at a traditional physical access layer we have two traditional options for LAN connectivity: Top-of-Rack (ToR) and End-of-Row (EoR) switching topologies.  Both have advantages and disadvantages.

EoR topologies rely on larger switches placed on the end of each row for server connectivity.

ToR utilizes a switch at the top of each rack (or close to it.)

Now let’s virtualize.  In a virtual server environment the most common way to provide Virtual Machine (VM) switching connectivity is a Virtual Ethernet Bridge (VEB) in VMware we call this a vSwitch.  A VEB is basically software that acts similar to a Layer 2 hardware switch providing inbound/outbound and inter-VM communication.  A VEB works well to aggregate multiple VMs traffic across a set of links as well as provide frame delivery between VMs based on MAC address.  Where a VEB is lacking is network management, monitoring and security.  Typically a VEB is invisible and not configurable from the network teams perspective.  Additionally any traffic handled by the VEB internally cannot be monitored or secured by the network team.

These are the two issues that VEPA and VN-tag look to address in some way.  Now let’s look at the two individually and what they try and solve.

VEPA is standard being lead by HP for providing consistent network control and monitoring for Virtual Machines (of any type.)  VEPA has been used by the IEEE as the basis for 802.1Qbg ‘Edge Virtual Bridging.’  VEPA comes in two major forms: a standard mode which requires minor software updates to the VEB functionality as well as upstream switch firmware updates, and a multi-channel mode which will require additional intelligence on the upstream switch.

The beauty of VEPA in it’s standard mode is in it’s simplicity, if you’ve worked with me you know I hate complex designs and systems, they just lead to problems.  In the standard mode the software upgrade to the VEB in the hypervisor simply forces each VM frame out to the external switch regardless of destination.  This causes no change for destination MAC addresses external to the host, but for destinations within the host (another VM in the same VLAN) it forces that traffic to the upstream switch which forwards it back instead of handling it internally, called a hairpin turn.)  It’s this hairpin turn that causes the requirement for the upstream switch to have updated firmware, typical STP behavior prevents a switch from forwarding a frame back down the port it was received on (like the saying goes, don’t egress where you ingress.)  The firmware update allows the negotiation between the physical host and the upstream switch of a VEPA port which then allows this hairpin turn.  Let’s step through some diagrams to visualize this.

Again the beauty of this VEPA mode is in its simplicity.  VEPA simply forces VM traffic to be handled by an external switch.  This allows each VM frame flow to be monitored managed and secured with all of the tools available to the physical switch.  This does not provide any type of individual tunnel for the VM, or a configurable switchport but does allow for things like flow statistic gathering, ACL enforcement, etc.  Basically we’re just pushing the MAC forwarding decision to the physical switch and allowing that switch to perform whatever functions it has available on each transaction.  The drawback here is that we are now performing one ingress and egress for each frame that was previously handled internally.  This means that there are bandwidth and latency considerations to be made.  Functions like Single Root I/O Virtualization (SR/IOV) and Direct Path I/O can alleviate some of the latency issues when implementing this.  Like any technology there are typically trade offs that must be weighed.  In this case the added control and functionality should outweigh the bandwidth and latency additions.

Multi-Channel VEPA is an optional enhancement to VEPA that also comes with additional requirements.  Multi-Channel VEPA allows a single Ethernet connection (switchport/NIC port) to be divided into multiple independent channels or tunnels.  Each channel or tunnel acts as an unique connection to the network.  Within the virtual host these channels or tunnels can be assigned to a VM, a VEB, or to a VEB operating with standard VEPA.  In order to achieve this goal Multi-Channel VEPA utilizes a tagging mechanism commonly known as Q-in-Q (defined in 802.1ad) which uses a service tag ‘S-Tag’ in addition to the standard 802.1q VLAN tag.  This provides the tunneling within a single pipe without effecting the 802.1q VLAN.  This method requires Q-in-Q capability within both the NICs and upstream switches which may require hardware changes. 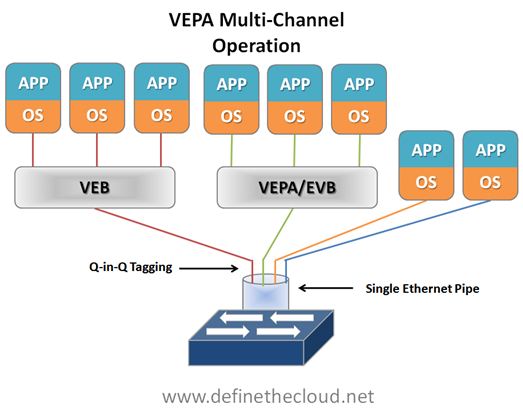 The VN-Tag standard was proposed by Cisco and others as a potential solution to both of the problems discussed above: network awareness and control of VMs, and access layer extension without extending management and STP domains.  VN-Tag is the basis of 802.1qbh ‘Bridge Port Extension.’  Using VN-Tag an additional header is added into the Ethernet frame which allows individual identification for virtual interfaces (VIF.) 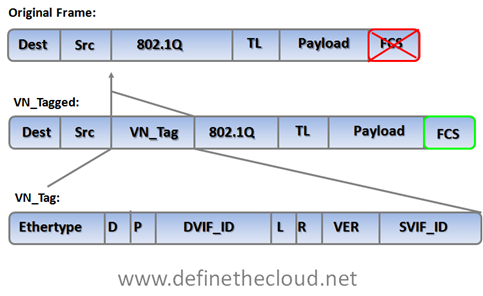 The most important components of the tag are the source and destination VIF IDs which allow a VN-Tag aware device to identify multiple individual virtual interfaces on a single physical port.

VN-Tag can be used to uniquely identify and provide frame forwarding for any type of virtual interface (VIF.)  A VIF is any individual interface that should be treated independently on the network but shares a physical port with other interfaces.  Using a VN-Tag capable NIC or software driver these interfaces could potentially be individual virtual servers.  These interfaces can also be virtualized interfaces on an I/O card (i.e. 10 virtual 10G ports on a single 10G NIC), or a switch/bridge extension device that aggregates multiple physical interfaces onto a set of uplinks and relies on an upstream VN-tag aware device for management and switching.

Where does that leave us?

We are still very early in the standards process for both 802.1qbh and 802.1Qbg, and things are subject to change.  From what it looks like right now the standards body will be utilizing VEPA as the basis for providing physical type network controls to virtual machines, and VN-tag to provide bridge extension.  Because of the way in which each is handled they will be compatible with one another, meaning a VN-tag based bridge extender would be able to support VEPA aware hypervisor switches.

Equally as important is what this means for today and today’s hardware.  There is plenty of Fear Uncertainty and Doubt (FUD) material out there intended to prevent product purchase because the standards process isn’t completed.  The question becomes what’s true and what isn’t, let’s take care of the answers FAQ style:

Will I need new hardware to utilize VEPA for VM networking?

No, for standard VEPA mode only a software change will be required on the switch and within the Hypervisor.  For Multi-Channel VEPA you may require new hardware as it utilizes Q-in-Q tagging which is not typically an access layer switch feature.

Will I need new hardware to utilize VN-Tag for bridge extension?

Yes, VN-tag bridge extension will typically be implemented in hardware so you will require a VN-tag aware switch as well as VN-tag based port extenders.

Will hardware I buy today support the standards?

That question really depends on how much change occurs with the standards before finalization and which tool your looking to use:

Are there products available today that use VEPA or VN-Tag?

VEPA and VN-tag both look to address common access layer network concerns and both are well on their way to standardization.  VEPA looks to be the chosen method for VM aware networking and VN-Tag for bridge extension.  Devices purchased today that rely on pre-standards versions of either protocol should maintain compatibility with the standards as they progress but it’s not guaranteed.    That being said standards are not required for operation and effectiveness, and most start as unique features which are then submitted to a standards body.