So to start things off I thought I’d take a stab at defining the cloud.  This is always an interesting subject because so many people have placed very different labels and definitions on the cloud.  YouTube is filled with videos of high dollar IT talking heads spitting up non-sensical answers as to what cloud is, or in many cases diverting the question and discussing something they understand.  So before we get into what it is let’s talk about why it’s so hard to define?

Part of the difficulty in defining cloud comes from the fact that the term gets its power from being loosely defined.  If you put a strict definition on it, the term becomes useless.  For example put yourself in the shoes of an IT vendor account manager (sales rep), if you are an account manager stay in your own shoes for the next excercise and forget I said sales rep.

Now from those shoes imagine yourself in a meeting with a CxO discussing the data center.  A question such as ‘Have you looked into implementing a cloud strategy and if so what are your goals’ can be quite powerful.  It’s an open-ended question that leaves plenty of room for discussion.  Within that discussion there is a large opportunity to identify business challenges, and begin to narrow down solutions which equates to potential product sales to meet the customers requirements.

If cloud had a strict definition such as ‘Providing an off-site hosted service at a subscription rate’ it would only be applicable to a handful of customers.  Any strict definition of cloud based on size, location, infrastructure requirements, etc. reduces the overall usability of the term.  This doesn’t imply that cloud is just a sales term and should be ignored, but it does make the definition more complicated.

From a sales perspective the value of cloud is the flexibility of the term, which is quite interestingly one of the technical values to the customer (we’ll discuss that later.)  From a customer perspective the real challenge is defining what it means to you.  Service providers such as BT and AT&T will have very different definitions of cloud from Amazon and Google.  Amazon and Google will define cloud differently than SalesForce.com, and they’ll all have totally different definitions than the average enterprise customer.  This is because the definition of cloud is in the eye of the beholder, it’s all about how the concept can be effectively applied to the individual business demands.

Part of the reason engineers tend to cringe when they hear the term cloud is that it has no real meaning to an engineer.  Engineers work with defined terms that are quantifiable, bandwidth, bus speed, port count, disk space. If you use any of those terms in your definition you’ve already missed the point.  To make matters worse the more cloud gets discussed the more confusing it becomes from an engineering standpoint, we started with just cloud and now have: private cloud, internal cloud, public cloud, secure cloud, hybrid cloud, semi-private cloud.  It’s akin to LAN, MAN, WAN, CAN, PAN, GAN to describe various ‘Area networks’ except at least those can move data and cloud is just a term.

Cloud is not an engineering term, cloud is a business term.

Cloud does not solve IT problems, cloud solves business problems.

So to bring a definition to the term let’s stay at 10,000 feet and think conceptually, because that’s what it’s really all about.  Think about the last time you saw a PDF, or drew a whiteboard that discussed moving data across the internet.  Did you draw the complex series of routers and switches, optical mux’s and de-mux’s that moved your packet from London to Beijing?  Of course not, but what did you draw instead, why?   If you’re like most of the world you drew a cloud, you drew that cloud because you don’t care about the underlying infrastructure or complexity.  You know that the web has already been built and it works.  You know that if you put a packet in one end, it will eventually come out the other.  You don’t care how it gets there, only that it does.  The term cloud is no more complex than that, it’s all about putting together an infrastructure that gets the job done without having to dwell on the underlying components.

The point of moving to a cloud architecture is a rethinking of what the data center really does and how it does it in order to alleviate current data center issues without causing new ones.  Start by asking what is the purpose of the data center, and really take some time to think about it.  The entire data center, from the input power through the distribution system and UPS, the cooling, the storage, the network, and the servers are all there to do one thing, run applications.  The application truly is the center of the data center universe.  If you’ve ever been on a help desk team and got a call from a user saying ‘the network is slow’ it wasn’t because they ran a throughput test and found a bottleneck, it was because their email wouldn’t load or it took them an extra 15 seconds to access a database.  The data center itself is there to support the applications that run the business.

That tends to be a hard pill to swallow for people who have spent their lives in networks, or storage, or even server hardware because in reality the only Oscar they could ever receive is best supporting actor, applications are the star of the show.  No company built a network and then decided they should find an application to use up some of that bandwidth.  We’ve built our infrastructures to support the applications we choose to run our business, and that’s where the problems came from.

We’ve built data center infrastructures one app at a time as our businesses grew, adding on where necessary and removing when/if possible.  What we’ve ended up with is a Frankenstein type mess of siloed architecture and one trick pony infrastructure.  We’ve consolidated, and scaled in or out, we’ve virtualized all to try to fix this and we’ve failed.  We’ve failed because we’ve taken a view of the current problems while wearing blinders that prevented seeing the big picture.  The big picture is that businesses require apps, apps come and go, and apps require infrastructure.  The solution is building a flexible, available, high performance platform that adapts to our immediate businesses needs.  A dynamic infrastructure that ties directly to the business needs without the need for procurement or decommission when an app comes up or hits its end-of-life.  That applies to any type of cloud you care to talk about.

In future blogs I’ll describe the technical and business drivers behind cloud solutions, the types of clouds, the risks of cloud, and the technology that enables a move to cloud.  I’ll do my best to remain vendor neutral and keep my opinions out of it as much as possible.  I welcome any and all feedback, comments and corrections.

The cloud doesn’t have to be a pig 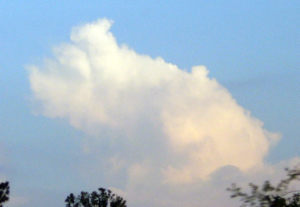