As the industry moves deeper and deeper into virtualization, automation, and cloud architectures it forces us as engineers to break free of our traditional silos.  For years many of us were able to do quite well being experts in one discipline with little to no knowledge in another.  Cloud computing, virtualization and other current technological and business initiatives are forcing us to branch out beyond out traditional knowledge set and understand more of the data center architecture as a whole.

It was this concept that gave me the idea to start a new series on the blog covering the foundation topics of each of the key areas of data center.  This will be lessons designed from the ground up to give you a familiarity with a new subject or refresh on an old one.  Depending on your background, some, none, or all of these may be useful to you.  As we get further through the series I will be looking for experts to post on subjects Iâ€™m not as familiar with, WAN and Security are two that come to mind.  If youâ€™re interested in writing a beginners lesson in one of those topics, or any other please comment or contact me directly.

As Iâ€™ve said before in previous posts the application is truly the heart of the data center.  Applications themselves are the reason we build servers, networks, and storage systems.  Applications are the email systems, databases, web content, etc that run our businesses.  Applications run within the confines of an operating system which interfaces directly with server hardware and firmware (discussed later) and provides a platform to run the application.  Operating systems come in many types, commonly Unix, Linux, and Windows with other variants used for specialized purposes such as mainframe and super computers.

Because the server itself sits more closely than any other hardware to the application understanding the server hardware and functionality is key.  Server hardware breaks down into several major components and concepts.  For this discussion we will stick with the more common AMD/Intel architectures known as the x86 architecture. 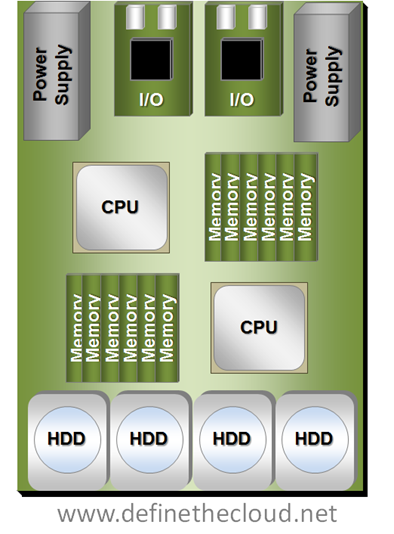 The diagram above shows a two socket server.  Starting at the bottom you can see the disks, in this case internal Hard Disk Drives (HDD.)  Moving up you can see two sets of memory and CPU followed by the I/O cards and power supplies.  The power supplies convert A/C current to appropriate D/C current levels for use in the system.  Additionally not shown would be fans to move air through the system for cooling.

The bus systems, which are not shown, would be a series of traces and chips on the system board allowing separate components to communicate.

A Quick Note About Processors:

Processors come in many shapes, sizes, and were traditionally rated by speed measures in hertz.  Over the last few years a new concept has been added to processors, and that is â€˜cores.â€™  Simply put a core is a CPU placed on a chip beside other cores which each share certain components such as cache and memory controller (both outside the scope of this discussion.)  If a processor has 2 cores it will operate as if it was 2 physically independent identical processors and provide the advantages of such.

Another technology has been around for quite some time called hyper threading.  A processor can traditionally only process one calculation per cycle (measured in hertz) this is known as a thread.  Many of these processes only use a small portion of the processor itself leaving other portions idle.  Hyper threading allows a processor to schedule 2 processes in the same cycle as long as they donâ€™t require overlapping portions of the processor.  For applications that are able to utilize multiple threads hyper threading will provide an average of approximately 30% increases whereas a second core would double performance.

Not all applications and operating systems can take advantage of multiple processors and cores, therefore it is not always advantageous to have more cores or processors.  Proper application sizing and tuning is required to properly match the number of cores to the task at hand.

When a server is first powered on the BIOS is loaded from EEPROM (Electronically Erasable Programmable Read-Only Memory) located on the system board.  While the BIOS is in control it performs a series of Power On Self Tests (POST) ensuring the basic operability of the main system components.  From there it detects and initializes key components such as keyboard, video, mouse, etc.  Last the BIOS searches for a bootable device.  The BIOS searches through available bootable media for a device containing a bootable and valid Master Boot Record (MBR.)  It then loads this and allows that code to take over with the load of the operating system.

The order and devices the BIOS searches is configurable in the BIOS settings.  Typical boot devices are:

Boot order is very important when there is more than one available boot device, for instance when booting to a CD-ROM to perform recovery of an operating system that is installed.  It is also important to note that both iSCSI and Fibre Channel network connected disks are handled by the operating system as if they were internal Small Computer System Interface (SCSI) disks.  This becomes very important when configuring non-local boot devices.  SCSI as a whole will be covered during this series.

Once the BIOS is done getting things ready and has transferred control to the bootable data in the MBR that bootable data takes over.  That is called the operating system (OS.)  The OS is the interface between the user/administrator and the server hardware.  The OS provides a common platform for various applications to run on and handles the interface between those applications and the hardware.  In order to properly interface with hardware components the OS requires drivers for that hardware.  Essentially the drivers are an OS level set of software that allow any application running in the OS to properly interface with the firmware running on the hardware.

Applications come in many different forms to provide a wide variety of services.  Applications are the core of the data center and are typically the most difficult piece to understand.  Each application whether commercially available or custom built has unique requirements.  Different applications have different considerations for processor, memory, disk, and I/O.  These considerations become very important when looking at new architectures because any change in the data center can have significant effect on application performance.

The server architecture goes from the I/O inputs through the server hardware to the application stack.  Proper understanding of this architecture is vital to application performance and applications are the purpose of the data center.  Servers consist of a set of major components, CPU’s to process data, RAM to store data for fast access, I/O devices to get data in and out, and disk to store data in a permanent fashion.  This system is put together for the purpose of serving an application.

This post is the first in a series intended to build the foundation of data center.  If your starting from scratch they may all be useful, if your familiar in one or two aspects then pick and choose.  If this series becomes popular I may do a 202 series as a follow on.  If I missed something here, or made a mistake please comment.  Also if youâ€™re a subject matter expert in a data center area that would like to contribute a foundation blog in this series please comment or contact me.