The May 24th IDC report on server market share by the IDC validated a technology Iâ€™ve been passionate about for some time; Cisco unified Computing System (UCS.)  For the first time since UCSâ€™s launch two years ago Cisco reported server earnings to IDC with amazing result â€“ #3 in global Blade Server market share and 1.6% factory revenue share overall for servers as a whole.  Find the summary of blades by Kevin Houston here: http://bladesmadesimple.com/2011/05/q1-2011-idc-worldwide-server-market-shows-blade-server-leader-as/ and the IDC report here: http://www.idc.com/getdoc.jsp?containerId=prUS22841411.

This report shows that in two years Cisco has either taken significant market share from incumbents, driven new demand, or both.  Regardless of where the numbers came from they are impressive, as far as servers go itâ€™s close to David and Goliath proportions and still playing out with Cisco about 1% behind IBM in the #2 spot.  I have been a â€˜cheerleaderâ€™ for UCS for nearly its entire existence but didnâ€™t start that way.  I describe the transition here: http://www.definethecloud.net/why-cisco-ucs-is-my-a-game-server-architecture.

Prior to Cisco UCS I was a passionate IBM BladeCenter advocate, great technology, reliable hardware and a go-to brand.  I was passionate about IBM.  When IBM launched the BladeCenter H they worked hard to ensure customer investment protection and in doing so anchored the H chassis as a whole.  They hindered technical enhancements and created complexity to ensure the majority of components customers purchased in BladeCenter E would be forward compatible.  At the time I liked this concept, and IBM had several great engineering concepts built in that provided real value.

In the same time frame HP released the C-Class blade chassis which had no forward/backward compatibility with previous HP blade architectures but used that fresh slate to build a world class platform that had the right technology for the time with the scalability to move far into the future.  At that point from a technical perspective I had no choice but to concede HP as the technical victor but I still whole-heartedly recommended IBM because the technical difference was minimal enough that IBMâ€™s customer investment protection model made them the right big picture choice in my eyes.

I always work with a default preference or what I call an â€˜A-Gameâ€™ as described in the link above, but my A-Game is constantly evolving.  As I discover a new technology that will work in the spaces I exist I assess it against my A-Game and decide whether it can provide better value to 80% or more of the customer base I work with.  When a technology is capable of displacing my A-Game I replace it.

Sean McGee (http://www.mseanmcgee.com/) says it better than I can, so Iâ€™ll paraphrase him â€˜Iâ€™m a technologist, I work with and promote the best technology Iâ€™m aware of and canâ€™t support a product once I know a better one exists.â€™

In the same fashion Iâ€™ll support and promote Cisco UCS until a better competitor proves itself, and Iâ€™m happy to see that customers agree based on the IDC reporting.

For some added fun here are some great Twitter comments from before the IDC announcement served with a side of crow: 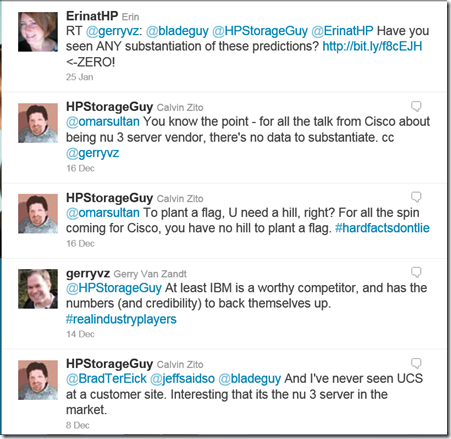 One Reply to “Technology Passion”