For the last several months there has been a lot of chatter in the blogosphere and Twitter about FCoE and whether full scale deployment requires QCN.Â  There are two camps on this:

Typically the camps break down as follows (there are exceptions) :

For the purpose of this post Iâ€™m not camping with either side, Iâ€™m not even breaking out my tent.Â  What Iâ€™d like to do is discuss when and where QCN matters, what it provides and why.Â  The intent being that customers, architects, engineers etc. can decide for themselves when and where they may need QCN.

With window sizing TCP dynamically determines the number of frames to send at once without an acknowledgement.Â  It continuously ramps this number up dynamically if the pipe is empty and acknowledgements are being received.Â  If a packet is dropped due to congestion and an acknowledgement is not received TCP halves the window size and starts the process over.Â  This provides a mechanism in which the maximum available throughput can be achieved dynamically.

Below is a diagram showing the dynamic window size (total packets sent prior to acknowledgement) over the course of several round trips.Â  You can see the initial fast ramp up followed by a gradual increase until a packet is lost, from there the window is reduced and the slow ramp begins again.

If you prefer analogies I always refer to TCP sliding windows as a Keg Stand (http://en.wikipedia.org/wiki/Keg_stand.) In the photo we see severalÂ gentleman surrounding a keg, with one upside down performing a keg stand.

To perform a keg stand:

What the hell does this have to do with TCP Flow Control? Iâ€™m so glad you asked.

During a keg stand your friend is trying to push as much beer down your throat as it can handle, much like TCP increasing the window size to fill the end-to-end pipe.Â  Both of your hands are occupied holding your own weight, and your mouth has a beer hose in it, so like TCP you have no native congestion signaling mechanism.Â  Just like TCP the flow doesnâ€™t slow until packets/beer drops, when you start to spill they stop the flow.

FC is moving SCSI data, and SCSI is sensitive to dropped frames, latency is important but lossless delivery is more important.Â  To ensure a frame is never dropped FC uses a hop-by-hop flow control known as buffer-to-buffer (B2B) credits. At a high level each FC device knows the amount of buffer spaces available on the next hop device based on the agreed upon frame size (typically 2148 bytes.)Â  This means that a device will never send a frame to a next hop device that cannot handle the frame.Â  Letâ€™s go back to the world of analogy.

The B2B credit system works in the same method youâ€™d have 10 Marines offload and stack a truckload of boxes (â€˜fork-lift, we donâ€™t need no stinking forklift.â€™)Â  The best system to utilize 10 Marines to offload boxes is to line them up end-to-end one in the truck and one on the other end to stack.Â  Marine 1 in the truck initiates the send by grabbing a box and passing it to Marine 2, the box moves down the line until it gets to the target Marine 10 who stacks it.Â  Before any Marine hands another Marine a box they look to ensure that Marines hands are empty verifying they can handle the box and it wonâ€™t be dropped.Â  Boxes move down the line until they are all offloaded and stacked.Â  If anyone slows down or gets backed up each marine will hold their box until the congestion is relieved.

In this analogy the Marine in the truck is the initiator/server and the Marine doing the stacking is the target/storage with each Marine in between being a switch.

When two FC devices initiate a link they follow the Link-Initialization-Protocols (LIP.)Â  During this process they agree on an FC frame size and exchange the available dedicated frame buffer spaces for the link.Â  A sender is always keeping track of available buffers on the receiving side of the link.Â  The only real difference between this and my analogy is each device (Marine) is typically able to handle more than one frame (box) at once.

So if FC networks operate without end-to-end congestion management just fine why do we need to implement a new mechanism in FCoE, well there-in lies the rub.Â  Do we need QCN?Â  The answer is really Yes and No, and it will depend on design.Â  FCoE today provides the exact same flow control as FC using two standards defined within Data Center Bridging (DCB) these are Enhanced Transmission Selection (ETS) and Priority-Flow Control (PFC) for more info on theses see my DCB blog: http://www.definethecloud.net/?p=31.)Â  Basically ETS provides a bandwidth guarantee without limiting and PFC provides lossless delivery on an Ethernet network.

The reason QCN was developed is the differences between the size, scale, and design of FC and Ethernet networks.Â  Ethernet networks are usually large mesh or partial mesh type designs with multiple switches.Â  FC designs fall into one of three major categories Collapsed core (single layer), Core edge (two layer) or in rare cases for very large networks edge-core-edge (three layer.)Â  This is because we typically have far fewer FC connected devices than we do Ethernet (not every device needs consolidated storage/backup access.)

If we were to design our FCoE networks where every current Ethernet device supported FCoE and FCoE frames flowed end-to-end QCN would be a benefit to ensure point congestion didnâ€™t clog the entire network.Â  On the other hand if we maintain similar size and design for FCoE networks as we do FC networks, there is no need for QCN.

Letâ€™s look at some diagrams to better explain this: 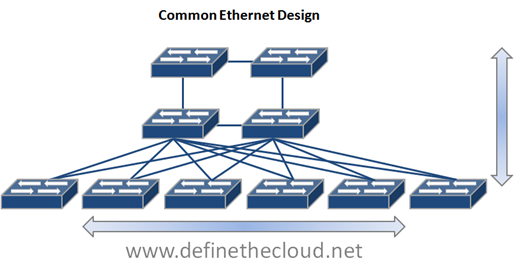 In the diagrams above we see a couple of typical network designs.Â  The Ethernet diagram shows Core at the top, aggregation in the middle, and edge on the bottom where servers would connect.Â  The Fibre Channel design shows a core at the top with an edge at the bottom.Â  Storage would attach to the core and servers would attach at the bottom.Â  In both diagrams Iâ€™ve also shown typical frame flow for each traffic type.Â  Within Ethernet, servers commonly communicate with one another as well network file systems, the WAN etc.Â  In an FC network the frame flow is much more simplistic, typically only initiator target (server to storage) communication occurs.Â  In this particular FC example there is little to no chance of a single frame flow causing a central network congestion point that could effect other flows which is where end-to-end congestion management comes into play.

What does QCN do:

In the above example two 2Gbbps hosts are sending full rate frame flows to two storage devices.Â  One of the storage devices is a 2Gbps device and can handle the full speed, the other is a 1Gbps device and is not able to handle the full speed. If these rates are sustained switch 3â€™s buffers will eventually fill and cause centralized congestion effecting frame flows to both switch 4, and 5.Â  This means that the full rate capable devices would be affected by the single slower device.Â  QCN is designed to detect this type of congestion and push it to the edge, therefore slowing the initiator on the bottom right avoiding overall network congestion.

This example is obviously not a good design and is only used to illustrate the concept.Â  In fact in a properly designed FC network with multiple paths between end-points central congestion is easily avoidable.

When moving to FCoE if the network is designed such that FCoE frames pass through the entire full-mesh network shown in the Common Ethernet design above, there would be greater chances of central congestion.Â  If the central switches were DCB capable but not FCoE Channel Forwarders (FCF) QCN could play a part in pushing that congestion to the edge.

If on the other hand you design FCoE in a similar fashion to current FC networks QCN will not be necessary.Â  An example of this would be: 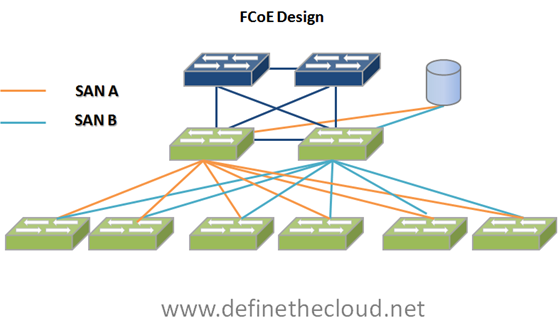 The above design incorporates FCoE into the existing LAN Core, Aggregation, Edge design without clogging the LAN core with unneeded FCoE traffic.Â  Each server is dual connected to the common Ethernet mesh, and redundantly connected to FCoE SAN A and B.Â  This design is extremely scalable and will provide more than enough ports for most FCoE implementations.

QCN like other congestion management tools before it such as FECN and BECN have significant use cases.Â  As far as FCoE deployments go QCN is definitely not a requirement and depending on design will provide no benefit for FCoE.Â  Itâ€™s important to remember that the DCB standards are there to enhance Ethernet as a whole, not just for FCoE.Â  FCoE utilizes ETS and PFC for lossless frame delivery and bandwidth control, but the FCoE standard is a separate entity from DCB.

Also remember that FCoE is an excellent tool for virtualization which reduces physical server count.Â  This means that we will continue to require less and less FCoE ports overall especially as 40Gbps and 100Gbps are adopted.Â  Scaling FCoE networks further than todayâ€™s FC networks will most likely not be a requirement.