*** Disclaimer: I work for a vendor who has several offerings in the world of intent-based infrastructure. If you choose to assume that makes my opinion biased and irrelevant, that’s your mistake to make, and you can save time by skipping the rest of this post. ***

In the ever evolving world of data center and cloud buzzwords, the word ‘intent’ is slowly gaining momentum: Intent-based x, intent-driven y, etc. What is ‘intent’ and how does that apply to networks, storage, servers, or infrastructure as a whole, or better yet to automation? Let’s take a look.

First, let’s peek at status quo automation. Traditional automation systems for technology infrastructure (switches, servers, storage, etc.) utilize low level commands to configure multiple points at once. For example the diagram below shows a network management system being used to provision VLAN 20 onto 15 switches from a single point of control.

The issue here is the requirement for low level policy rendering, meaning getting down to the: VLAN, RAID pool, firewall rule level to automate the deployment of a higher level business policy. Higher level business policy is the ‘intent’ and it can be definied in terms of: security, SLA, compliance, geo-dependancy, user-experience, etc. With a traditional automation method a lot of human interaction is required to translate from an applications business requirements, intent, and the infrastructure configuration. Worse, this communication typically occurs between groups that speak very different languages: engineers, developers, lines-of-business. The picture below deipicts this. 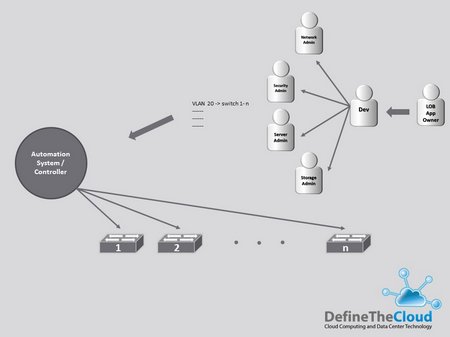 This ‘telephone game’ of passing app requirments is not only slow, it is also risk prone because a lot gets lost in the multiple layers of communication.

Hopefully you now have a slight grasp on the way traditional automation works, basically the overall problem statement. Now let’s take a dive into using intent to alleviate this issue.

I’m going to use the network as my example for the remainder of this post. The same concepts are applicable to any infrastructure, or the whole infrastructure, I just want to simplify the explanation. Starting at the top, a network construct like a VLAN is a low-level representation of some type of business policy. A great example might be compliance regulations. An app processes financial data that is regulated to be segmented from all other data. A VLAN is a Layer 2 segment, that in-part, helps to support this. The idea of an intent-driven architecture is to automate the infrastructure based on the high level business policy, and skip the middle layers of translation. Ideally you’d define how you implement policy/intent for something like financial data one time. From them on, simply tagging an app as financial data ensures the system provisions that policy. The diagram below shows this process. 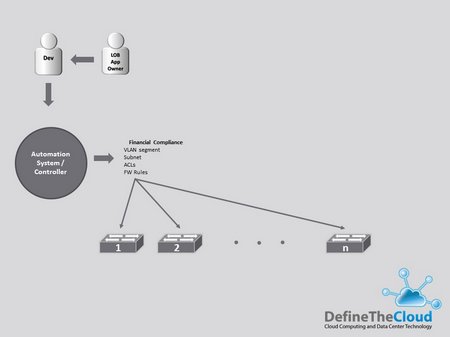 One common misnomer is that the network, or infrastructure must be intelligent enough to interpret intent. This is absolutely false. The infrastructure needs to be able to consume intent, not interpret or define it. Intent is already understood in business logic. The infrstructure should be able to consume that, and automate configuration based on that business logic intent. In the example in the diagram business logic has already been defined for the given organizations compliance requirments. Once it has been defined, it is a resuable object allowing automation of that policy for any app tagged requiring it. Another note is that the example uses a ‘dev’ referencing custom built software, the same methodology can be used with off the shelf software.

There are many reasons for not trying to build intent based systems that can automatically detect and consume intent. One, non-minimal reason is the cost of those systems. More important is the ability to actually execute on that vision. Using a network example, it would be fairly simple to build a network that can automatically detect an Oracle application using standard ports and connectivity. What the network alone would not be able to detect is whether that workload was a dev, test, or production environment. Each environment would require different policies or intent. Another example would be difference in policy enforcement. One company may consider a VLAN to be adequate segmentation for different traffic types, another would require a firewall, and a third might require ‘air-gap.’ These differences would not be able to be automatically understood by the infrastructure. Intent based systems should instead consume the existing business logic, and automate provisioning based on that, not attempt to reinterpret that business logic themselves.

The other major misnomer regarding intent based systems is that they must be ‘open’ and able to incorporate any underlying hardware and software. This is definitely not a requirement of intent based systems. There are pros, and cons to open portability across hardware and software platforms. Those should always be weighed when purchasing a system, intent-based or otherwise. One pro for an open system supporting heterogeneity might be the avoidance of ‘vendor lock-in.’ The opposing con, would be the additional engineering, QA costs as well as fragility of the system. There are many more pros/cons to both. To see some of my old, yet still relevant thoughts on ‘lock-in’ see this post: http://www.definethecloud.net/the-difference-between-foothold-and-lock-in/.

Overall intent-based systems are emerging and creating a lot of buzz, both within the vendor space and the analyst space. There are examples of intent-based automation for networking in products like Cisco’s Application Centric Infrastructure (ACI). System like these are one piece of a fully intent-driven architecture. I’ll discuss the other two pieces, assurance and analytics, in future posts, if I’m not simply too lazy to care.

** Update: Out of ignorance I neglected to mention another Intent-Based Networking system. Doug Gourlay was kind enough to point out Apstra to me (http://www.apstra.com/). After taking a look, I wanted to mention that they offer a vendor agnostic Intent-based networking solution. The omission was unintentional and I’m happy to add other examples brought to my attention. **

*** These thoughts are mine, not sponsored, paid for, or influenced by a paycheck. Take them as you will. ***