To build a true private cloud hardware/platform consolidation is layered with virtualization, automation and orchestration (without which the ‘On-Demand Self Service requirement of NIST’s definition is not met.)  The end result is a IT model and infrastructure that moves at the pace of business.

Converged infrastructure on the other hand is a subset of this, typically consolidation and virtualization but could possibly include some automation.  With all major vendors selling some form of ‘Integrated stack’ marketed at Private Cloud I thought I’d take a look at where four of the most popular actually fall along the path. 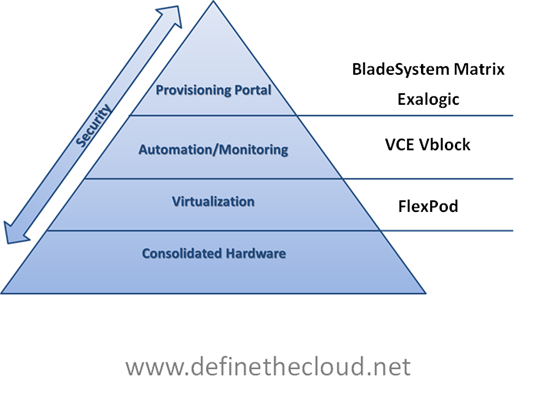 Starting from the bottom (as in bottom of the pyramid rather than bottom in quality, value, etc.)

FlexPod: FlexPod is an architecture designed using NetApp storage and Cisco compute and networking components.  The FlexPod architectures address various business and application needs but do not include automation/orchestration software.  The idea being that customers will have the flexibility to choose the level and type of automation/orchestration suite they require.

Vblock: Vblocks consist of EMC storage couple with VMware virtualization and Cisco Network/Compute.  Additionally VBlock incorporates EMC’s Unified Infrastructure Manager (UIM) which enables automation and single point of management for most of the infrastructure components. An orchestration suite would still be required for true private cloud.

BladeSystem Matrix: Is built upon HP BladeSystem, storage, network and software components and is managed by HP’s Cloud Service Automation.  The automation and orchestration tools included in that software suite put HP’s offering in the private cloud arena.

Depending on the drivers, requirements, and individual environment all of these stacks can offer customers a platform from which to rapidly build cloud services.  The key is in deciding what you want and what is the best tool to get you there.  The best tool to get you there will be based on both ROI and business agility as cost is not the only reason for a migration to cloud.

For a deeper look at private cloud stacks check out my post at Networking Computing (http://www.networkcomputing.com/private-cloud/229900081.)

4 Replies to “The Difference Between Private Cloud and Converged Infrastructure”